Feminism is a movement to end sexism, sexist exploitation, and oppression. I love this definition…. I love it because it so clearly states that the movement is not about being anti-male. It makes it clear that the problem is sexism.

Over the past several decades, the feminist movement has made enormous strides toward ending men’s violence against women and violence in LGBTQI+ relationships. In modern and inclusive intersectional feminism, the term “woman” encompasses all female-identifying individuals and nonbinary and genderqueer people as well. Historically, the mainstream feminist movement excluded Black women, Latinx women, Indigenous women, immigrant women, Middle Eastern women, trans women, genderqueer individuals, disabled women, and low-income women. Kimberlé Crenshaw wrote about the concept of intersectionality in 1989, and the principles of intersectionality were developed even earlier by the Combahee River Collective in 1977. Intersectionality refers to the interconnected nature of social categorizations such as race, class, and gender as they apply to a given individual or group, regarded as creating overlapping and interdependent systems of discrimination or disadvantage. Learn more on our Intersectionality page.

It is crucial to understand that feminism without intersectionality is not true feminism; for the feminist movement to truly work towards equity, it must highlight the experiences of marginalized communities and center the voices of Black women, Latinx women, Indigenous women, immigrant women, Muslim women, trans women, nonbinary and genderqueer individuals of color, women with disabilities, and low-income women.

Feminist theory aims to understand and combat gender based violence by identifying the ideas, customs, and institutions that promote relationship abuse and sexual violence. Culture contributes to the perpetration of relationship abuse and sexual violence by shaping norms; casting men as physical and short-tempered, devaluing women and non-male identifying individuals, and glorifying violence by men and within sexuality. At the same time, silence and privacy are encouraged in the family, and survivors are often blamed for the violence perpetrated against them. Feminism holds that gender based violence committed by men is supported by these limiting gender roles and constructed masculinity, while hetero-sexism and cultural beliefs about appropriate behavior make that violence appear normal and acceptable. Check out our pages on Rape Culture, Feminism in Action, and What Causes Relationship Abuse for more information. Check out the following websites for more information on modern feminism organizations in action:

While a major component of the feminist movement to end gender based violence is to continue work to provide safety and support for survivors and hold perpetrators (those who choose to harm) accountable, it also strives to confer ownership of the problem of gender violence and its prevention to men and refute the myth that victims provoke their own victimization. A distinction between Prevention vs. Awareness is key to the model of the feminist movement to end gender based violence. Prevention is defined as interventions that address the root causes of gender based violence: ingrained sexism, limiting ideal masculinity, the glorification of men’s violence, and the institutionalization of these ideals across society. Prevention encompasses programming designed for men and boys as well as bystander intervention. Awareness is more broadly defined as efforts to increase the public’s knowledge of relationship abuse and sexual assault, where to turn for resources, how to help a friend, and how to identify warning signs. Awareness can be geared towards womxn, and may include safety tips, such as self-defense classes, with the awareness that though these tips may reduce harm, they do not address the causes of men’s violence against them and are not preventative measures; prevention is in the hands of men who choose not to rape. This model holds that gender based violence will not end until we eradicate objectification of women and discrimination against genderqueer and nonbinary individuals. Until womxn are no longer seen as objects, they will continue to be considered “things” to be beaten and raped. See Rape Culture .

The movement against gender based violence recognizes that violence is a learned, gendered, and institutionally supported behavior, and targets the sources of violence rather than accepting the world as it is. It must also address issues of racism, classism, and hetero-sexism in order to effectively confront the gender-informed violence and oppression that affect the lives of all people. To do so, the feminist movement aims to re-frame masculinity, combat patriarchy, foster social justice, engage in activism and media advocacy to change social norms, influence commercial sectors, and impact public policy.

Check out more resources for men on our Guys Getting Involved page.

Every successful movement will experience backlash against it.

The term ‘backlash’ signifies both resistance to feminist struggles for change and efforts to maintain and increase the subordination of women.

Unfortunately, the progress of the feminist fight to end gender based violence has met resistance. Anti-feminist backlash theorists challenge the progress of the movement by promoting the inaccurate concept that women and non-male identifying individuals are equally as violent as men and are equally likely to be perpetrators, discounting or ignoring research that finds that up to 95% of relationship abuse and 99% of sexual assault is perpetrated by a man. The research that fuels the anti-feminist backlash is largely completed with ineffective research models and inaccurate data. Many studies that find women to be just as abusive as men utilize a flawed version of the Conflict Tactics Scale, which does not control for the context in which the violence occurred, such as use of force in self-defense or retaliation. Many people are inclined to listen to the anti-feminist backlash against feminist theory because it allows them to move back to comfortable, dominant ideology. In responding to backlash, it is important to recognize that feminists do not want to minimize the suffering of men that are victims of abuse. Instead, feminist anti-violence advocates seek to address the gendered nature of this crime while providing resources and support for survivors of all genders.

Anti-feminists also tend to fixate on the low possibility of false reporting when it comes to rape. False accusations comprise of only 2% of all accusations, the same for any felony;  these accusations are often interrupted very early in the legal process and do not go to trial. People are not worried about being falsely accused of money laundering in the same way that they are worried about a false accusation of rape; the media tends to aggravate this fear. Here is an example of backlash in response to a public service announcement about sexual assault. 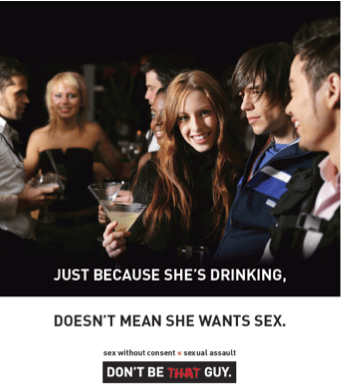 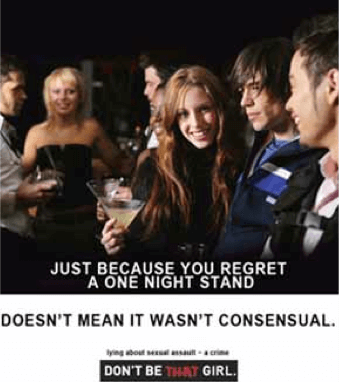 This sort of backlash response reflects a fear that they will be falsely accused of rape and is attached the myth that “regretted sex” can be confused with sexual assault. People who regret sex don’t call the police. Why do you think actual victims of sexual assault only come forward 10-20% of the time? It is because of the scrutiny and damage to the reputation of the woman who comes forward, even before an investigation occurs. Women, genderqueer and nonbinary people know that calling the police leads to their own sexual lives being put on trial, rather than any sort of justice, so it is not used as a tactic to “get back” at an ex. This fear of false accusation is put in perspective when we compare it to the reality for countless victims/survivors that the rapist will get away with the crime; only 2% of rapists are prosecuted. The reality is the very opposite of these fears; false accusations aren’t happening at high rates and actual survivors are not believed. The Enliven Project has come up with a helpful graphic that demonstrates the truth about false accusation and reporting rates.(Click the graphic for a larger, clearer image) 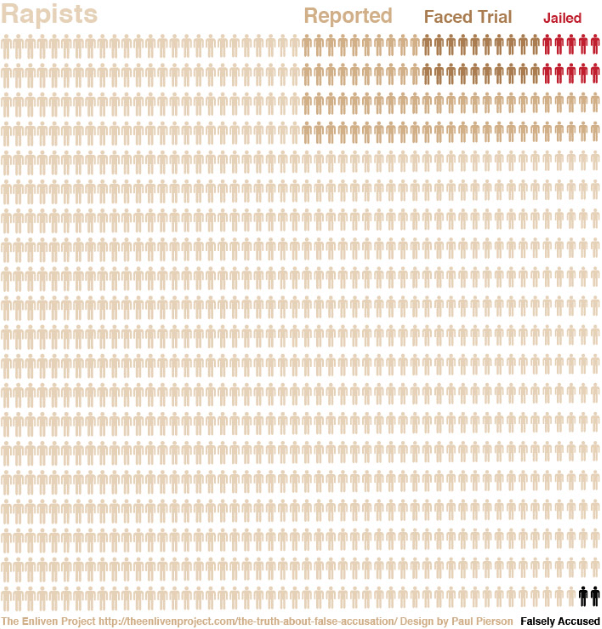 As the graphic demonstrates, only around 10% of all survivors come forward in the first place to report rape and sexual violence due to social, emotional, and legal barriers. Of that 10%, only a small number face trial, and an even smaller number are actually convicted. When you compare the overall proportion of non-convicted, unreported rapists among us to the percentage of those who are falsely accused (only 2%- the same as any other crime), it is clear that this fixation on false accusation is simply a distraction from the real issue: the lack of accountability for perpetrators and the lack of security and justice for survivors.

Many organizations that are part of the anti-feminist backlash may appear to be supportive of movements to end relationship abuse and sexual assault. For instance, the fathers’ rights movement seeks, on a surface level, to increase the involvement of fathers in the lives of their children. A key claim is that equal or shared custody of children should be a goal of custody arrangements following a divorce when relationship abuse is present. However, the efforts to attain custody often involve denying relationship abuse or sexual assault and forcing a survivor to interact with their abuser in the name of equality.  In these cases, abusers often refuse to be held accountable for their actions and instead focus on lowering the amount of child support they must pay. For more information about recognizing the anti-feminist backlash, check out Patriarchy Reasserted: Father’s Rights and Anti-VAWA Activism (PDF)

A Note on Terminology